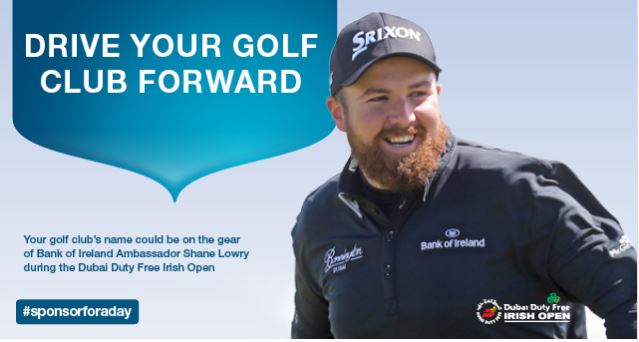 Brand extension with Sponsor for a Day golf

Two weeks ago, Bank of Ireland announced details of their Sponsor for a Day golf competition 2016 which gives one golf club in Ireland the opportunity of having its branding on Shane Lowry at the Dubai Duty Free Irish Open tournament in the K-Club on Thursday 19th and Friday 20th May. You may recall, here at Big Red Cloud, we had the good fortune of having our branding on the Leinster jersey for the Sponsor for a Day rugby competition in 2015.

In the subsequent weeks and months after the big day itself, we wondered how could Bank of Ireland leverage the sponsor for a day concept. One of their initiatives was Show Your Business at Taste of Dublin where they ran a competition to sponsor the attendance of one local / artisan food or beverage producer for the festival. Then along comes the Sponsor for a Day golf competition which in itself is a great example of brand extension.

It’s hard to believe that Sponsor for a Day is only three years old and that the rugby format has captured the imagination of small businesses the length and breadth of the country. When Gahan Meats won the inaugural sponsor for a day, Bank of Ireland received calls asking why they had stopped sponsoring Leinster Rugby. Fast forward to the second year when Big Red Cloud won and we had to schedule new service resources such was the expected increase in traffic to our website. We were well advised as we witnessed a 60% increase in web traffic immediately after the game.

There are two key lessons here for any small business reading this blog post.

1. Sponsor for a Day has some distinctive properties but they are not exclusive. Sponsor for a Day is a chance for the small guy to mix it with the big boys. It allows small businesses the opportunity to walk among the biggest sponsors in the market and for a time, to have the eyes and ears of the viewing public. Bank of Ireland has begun to leverage the Sponsor for a Day brand and step into other verticals; in this instance it’s golf.

So, how would you leverage your brand? Have you ever set the time aside to figure out what you could add to your business by leveraging a brand name that you have spent time cultivating and growing? Do you actually know the value of your small business brand?

While Sponsor for a Day is fantastic, it’s not exclusive. Who knows what competition or sponsorship alternatives are under wraps by other companies in Ireland, just waiting for the opportune moment to unveil them.

Don’t believe that your brand is that distinctive that it’s exclusive. It’s not.

2.  There is no point, and this is an important consideration, in planning any brand extension unless there is a market opportunity. It makes sense. There are some 190,000 small businesses in Ireland and a good percentage will have more than a passing interest in rugby so Sponsor for a Day makes perfect sense. A Sponsor for a Day competition for golf clubs also makes sense. With over 430 registered golf clubs and many thousands of members, Bank of Ireland is now poised to create some very positive news among the golfing fraternity in Ireland. They are leveraging the Sponsor for a Day brand and entering a market that they believe to offer market potential.

Your specific challenge is to determine the size of the market opportunity and when that job is done, you are then best placed to make the go / no-go decision. Small businesses don’t have the resources to carry out detailed market analysis as it’s prohibitively expensive but you must conduct some degree of analysis otherwise you may end up wasting valuable resources.

It will be interesting to see how the Shane Lowry initiative develops. The twist in this Sponsor for a Day competition is that the public voting will take place via  Shane Lowry’s Twitter account from 3rd-6th May. This move will alienate a percentage of golf club members who don’t have social media accounts but it’s more than likely that Bank of Ireland’s market analysis has told them that Twitter will generate significant brand awareness and more than compensate. Plus you’ll have the spillover into other media channels.

We wish the shortlisted golf clubs every success in the public voting.