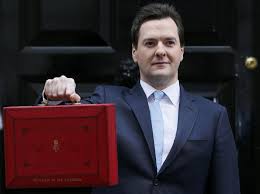 It’s that time of year again, the red briefcase will make an appearance and Chancellor George Osbourne will deliver Budget 2015 on Wednesday March 18th.

With the general election drawing ever closer, notable issues such as healthcare and pensions will be of great importance. Here at Big Red Cloud, we’re focusing on the business issues and how Budget 2015 could affect you.

In last year’s Budget, Osbourne reduced the corporation tax rate to 21%. He also promised that from 1st April 2015, the rate would drop to 20% and become unified with the small companies’ rate. Given the proximity of the election, it would be extremely surprising if the Chancellor reneged on this but there is a substantial budget deficit to balance. As a business owner, keep an eye out to make sure that corporation tax does in fact make it to 20%.

The Confederation of British Industry (CBI) has also lobbied the government and urged the Chancellor to provide greater support to mid-size firms. The CBI wants Annual Investment Allowances to increase. These allowances are tax relief on qualifying capital expenditures. The CBI also raised the issue of increasing R&D tax credits in order to help innovative small businesses and start ups become profitable more easily and in shorter time.

What about small businesses that don’t need to carry out research and development, or those not in a position to make of capital expenditure tax relief? What will the Budget hold for hairdressers, coffee shops, small construction companies and other independent small businesses which are the backbone of the UK economy? An announcement is expected on the current financial incentive for individuals to register as a company and work on a self-employed basis.

Besides that, business issues for this Budget seem predominantly based around tax incentives for innovative start-ups as well as sorting out tax avoidance issues that have come to light in recent months such as the ’Google Tax’. As such, changes are expected to how the UK taxes international transactions that take place within the UK.

If the Government can pad the coffers through making big business pay a more appropriate amount of tax, it won’t have to take any measures that may hinder the growth of small businesses. That’s something it would never want to do in the lead up to an election campaign. We’ll know for sure on March 18th.

Do you run a small business? Are you budgeting your cash flow? Check out our cash flow guide to make your business budgeting is as simple as possible. Read the guide.