Dublin Design studio was created in 2014 and they are looking to fund their first product, Scriba, via the cloud based Kickstarter platform.

From the guys at Dublin Design studio: Scriba is a new stylus designed around the natural movements of your hand. With a flexible body and dynamic squeeze motion, Scriba responds to your every touch, empowering you with greater freedom to express your creative self.

Scriba is clever; it’s a well thought out solution to an everyday problem – how to draw on iPads and other tablet devices. There are plenty of digital styluses on the market but Scriba sets itself apart  by being designed around the ergonomics of the hand and is not merely a digital equivalent of a traditional pen. 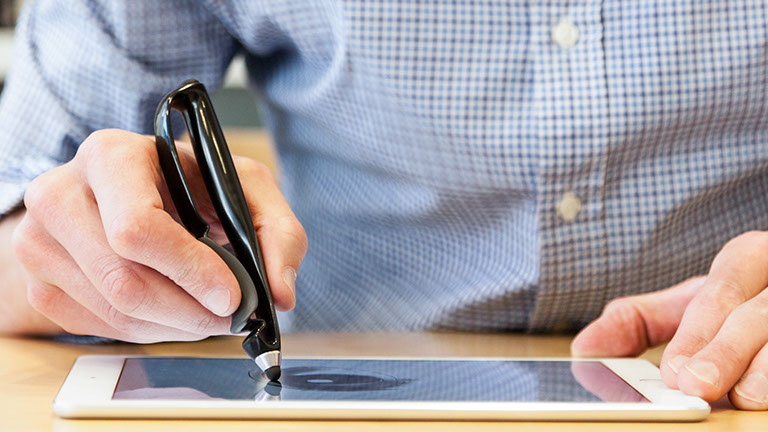 Scriba is also clever in that it has identified a target audience to go after. It’s targeting a niche of 3.5 million professional creatives in Europe and the US. They believe that by building credibility in this market that it will provide the gateway to the estimated 40 million illustrators, artists, hobbyists, mobile workers etc… worldwide who buy a digital stylus every year.

This could also prove to be a gateway to the some 650 million iPad owners worldwide with an expanded market in the 900 million creative painting and drawing apps downloaded every year. Pretty impressive market statistics.

Kickstarter is proving to be a great platform for new businesses to finance the manufacture of their products. As we reported back in November 2014, fellow Dubliner Rob O’Reilly, smashed his Kickstarter goal of €15,000 by raising €22,884 from 73 backers for his Expressiv plug and play electronic keyboard. As of Friday afternoon, the 17th July, Scriba has reached €15,567 of its €65,000 target from 128 backers. With 26 days to go, Scriba is well on track to achieving its goal of €65,000.

The stats behind the Kickstarter business are impressive. Since its launch in 2009, 9 million people have pledged more than €1.64 billion, funding 89,000 creative projects. With 15 diverse categories to choose from there is an opportunity for every small business reading this blog to consider a Kickstarter campaign.

Kickstarter have what they call a ‘Creator Handbook’ and it’s an easy-to-follow 8 step approach to getting started with your own project.

Imagine, as a startup, being in a position to have several hundred prepaid orders for your first product. No need for invoicing multiple clients, it’s all handled on Kickstarter’s software platform.

Check it out, who knows, Kickstarter could be just the opportunity your business idea has been waiting for.

If you do sign up to the Kickstarter platform drop us a line here at Big Red Cloud. We’d love to write about another success story.