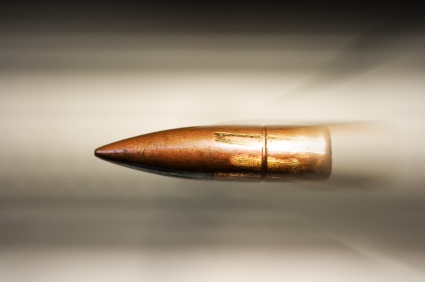 Faster than a bullet: The speed of a customer complaint in 2015

Once upon a time a customer complaint might take some time to filter through via traditional channels- by phone, post or in person. But in today’s hyper connected world, a customer complaint can be made in seconds and what’s more, hundreds of thousands of people can quickly become witnesses and active participants to this complaint being made.

Take the recent and well documented travails of international rugby referee Nigel Owens. He was due to travel from Bristol to Dublin to referee the Leinster v Zebre Pro 12 Game, only to be denied boarding by Ryanair as he forgot his passport. Ryanair’s T&Cs are very clear and you must present your passport to board the flight. Mr. Owens missed his flight and as he got ready to return home to collect his passport, he did what millions of people are now doing, he let the world know his predicament by posting his thoughts via social media, in this instance via Twitter. 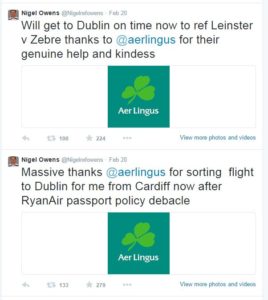 Here’s where the story takes off, excuse the pun. A flurry of tweets ensues between Mr. Owens and Ryanair until Ryanair’s arch nemesis Aer Lingus jumps on board and reassures Mr Owens that it’s much easier to travel with Aer Lingus as you don’t need a passport to board. Mr. Owens happily jumps jets and packs down with Aer Lingus for his Dublin bound flight.

Interestingly, Mr Owens pointed out that he respected the Ryanair policy but argued that all that was needed was a ‘bit of common sense.’ It’s a customer complaint nonetheless.

The bigger story here is not Mr. Owens’ Twitter ping pong with Ryanair and Aer Lingus but the oxygen that was pumped into this story by the use of social media. If there was no Twitter, Facebook or Snapchat this story would never have generated the interest it did.

Count the number of retweets via the 5 quoted tweets in this blog post. 905 and counting as this story will run for a while yet. In social media parlance, it’s ‘reach’ was considerable.

The $64,000 dollar question for any small business owner reading this post is, what is your next unsatisfied customer going to do to vent his or her displeasure. Long gone is the customer suggestion box, they are a quaint reminder of a time gone by. You now need social media tools to listen and to watch what is going on in and around your business. Customer service has to be a core business function.

As an aside, see how humour percolates the entire episode as a clever Leinster fan issues Mr Owens with a new passport. 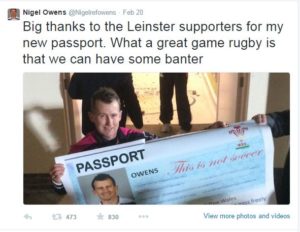 If you recognise the potential on offer then you’ll be setting up your social media accounts this week. A great business, no matter its size, thrives when it’s proactive in dealing with customer complaints. All that is required, in most instances, is a sympathetic voice. From the example above, that’s what Mr Owens was looking for.