A default set of Control Accounts are setup with accounts from the default Chart of Accounts.  The Debtors and Creditors Control Accounts cannot be changed once transactions have been entered into Big Red Cloud.

A Control Account is a record in total of all the amounts entered in detail to the individual accounts of other ledgers. As an integral part of a Nominal Ledger the Control Accounts item only appears on the Setup menu when the Nominal is On. 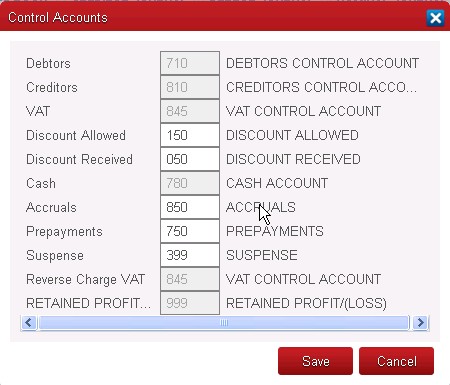 There are 11 Control Accounts within the Big Red Cloud’s Nominal Ledger as above.

If you do not intend to use the default Control Accounts you should now assign your own using the procedure described below.

When Control Account has had one or more entries posted to it, its icon will disappear off the Control Accounts list and its Nominal Account Code (shown in the box alongside) will grey out.  At this point it cannot be changed.