There are a number of reports relating to the Purchase Ledger in the accounting software and the purpose and content of each will be described below. 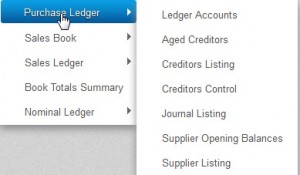 This report lists the amount owing to each Supplier as of the end of a specified month and provides an aged analysis of the balance on each account.  You can choose to exclude Suppliers with a zero balance as of the month specified.

You can select the Period up to which transactions should be included.  Transactions will be included based on the Period and not the transaction date.  Negative balances are always applied progressively from the oldest, e.g. if a supplier owed you money from 3 months ago and there were no other transactions it would appear as a ‘Current’ balance.

Calculating Aged Balances With Allocations Off.

The transaction date determines its age as either Current, 1 Month old, 2 Months or 2 Months+.

Applied so as to reduce the oldest balance first.

These will be treated as either Invoices or Payments depending on which option you chose in Setup/Options.

Calculating Aged Balances With Allocations On.

Balances are calculated based on the outstanding balance of invoices only on the date being aged to.  Unallocated payments are shown separately.

This report lists the amount owing to each Supplier as of the end of a specified month.  It also shows the turnover with each Supplier (i.e. the total of all invoices less credit notes received from that Supplier in the Financial Year-to-Date).  You can choose to exclude Suppliers with a zero balance as of the month specified in the report.

This report provides a summary, for a specified period, of all the activity between your business and your Suppliers/Creditors.  It shows summary totals for all purchase invoices (net of credit notes), payments made, discounts received and adjustments made to accounts through Journal entries.  It is useful in providing a quick overview of aggregate totals for Purchase Ledger (i.e. Creditors) activity.  The figures displayed on this report are calculated as follows:

Opening Balance – The total of the balances owed to all Suppliers at the beginning of the chosen start month.

Invoices – The total of all Suppliers’ invoices (less credit notes) entered in the Purchases Book for the specified period.

Cheques, Cash and Discounts – The totals (respectively) of all payments entered to Suppliers’ Accounts through the Bank Payments and Cash Payments Books, and the total of any Discount Received as entered in both of these books.

Closing Balance – The total of the balances owed to all Suppliers at the end of the period specified.

This report lists and totals the Creditor Journal adjustments made to Supplier Accounts.  The list will only contain those entries made in the range of months which you specify at the start of each report.

This report lists Suppliers opening balances at the start of your Financial Year.  If you first began operating Big Red Cloud midway through a Financial Year, then the balances shown are those as at the beginning of your First Month of Entry.  The report will not necessarily include all of the Suppliers who presently have an account in the Purchase Ledger since you may have added some new accounts after you started.  You can choose to exclude Suppliers with a zero opening balance.

This is a list of the Account Codes / Names / Addresses / Contact Names / E-mail Addresses / Telephone and Fax Numbers of all Suppliers that are presently set up in your Company.

This report is only available when Allocations is switched on.

On selecting this report the following screen is displayed: 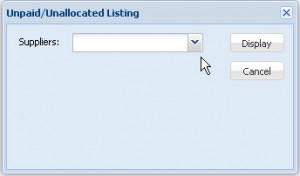 Click on the down arrow to the right of the field to display a list of Suppliers and select the ones to included in the report.  On the selection screen there are tick boxes to the left of suppliers names.  To select or deselect all click on the box to the left of the report title.

A listing is display of all the unpaid invoices and unallocated payments for each of the selected suppliers.