VAT-only invoices typically come from Customs or from freight shippers and relate to the VAT element for goods previously imported.  They usually relate to goods imported from outside the EC.  Typically an invoice with no VAT element will have already been received from the foreign supplier.

The best approach to entering VAT-only invoices is to think of them in conjunction with the original invoice from the foreign supplier, and is best understood by example.  In this case, an invoice has already been received without a VAT element, for €1,000, with the VAT Type entered as Foreign – Non-EU.

For the VAT-only invoice which follows, the amount of VAT that would have been paid would have to be calculated manually; in this case it would be 210 at 21%.

The VAT-only invoice works simply by entering the VAT amount, €210 as the Total and the Total VAT, but analysing the original net amount (1,000) at both the relevant VAT rate and at 0%.  At 0%, it is entered as a minus figure to cancel the net amount out in the calculations and leave only the VAT amount.  The following illustration demonstrates how the entry is made: 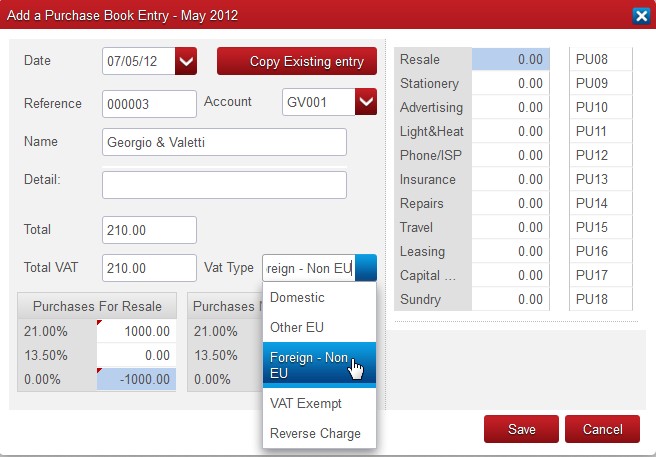 Entry of a VAT-Only Invoice.

Note: There is no net amount appearing in the Analysis Categories as it is zero.

Note: This invoice, which has a zero net amount and a VAT amount, works in conjunction with the original net-only invoice to produce a gross balance.